Exeter: A City in the Countryside

You know, there’s a saying around here… it goes Devon: Sounds like Heaven, because it is!

And well, it turns out there’s something in it because in 2018 Arcadis rated Exeter as the number one city for quality of life. Naturally, at Exeter Live Better we agree. We LOVE Exeter. This fair old city, established on the banks of the River Exe is more than just a place to be because of a job, it’s the thumping, pumping heart and soul of Devon and we want to tell you all about it. Maybe one day you’ll come and join us.

One of the most wonderful things about Exeter is that is offers a great balance between urban and rural life. The city’s size (just over 47km2) means that wherever you are, you are never too far from open space and residents are almost spoilt for choice when it comes to choosing how to spend time in nature. In fact, from pretty much anywhere in the city you’ll have a view of greenspace and if you’re lucky, those luscious rolly-polly Devon hills.

On the outskirts of Exeter, there are six ‘Valley Parks’ to choose from, all managed by Devon Wildlife Trust. These are free to enter, open 24 hours a day and offer a great variety of walks, bike rides and opportunities to find out more about the nature on our doorstep.

There are more than 300 hectares of green infrastructure (including some privately owned), in the Valley Parks, in addition to being close to three European Sites, protected because of their international importance for flora and fauna. Together with Devon Wildlife Trust (DWT) the city council is investing in the protection and enhancement of these essential natural assets, while creating new habitats where biodiversity will continue to thrive in our city.

Described as ‘countryside in the city’ and the ‘green lungs within the urban setting’, our Valley Parks are key in achieving the Council’s target to be a Net Zero Carbon City by 2030 and respond to the Government’s pledge to tackle biodiversity loss globally.

The Wildlife Trust has also partnered with the City Council on an exciting project – ‘Wild City’, aiming to ensuring that Exeter’s future development will protect its wildlife and that it has space to thrive. The project is working with almost every school in the city too, ensuring that future generations also understand, and look after the abundance of nature on their doorstep.

Steve Hussey, of Devon Wildlife Trust, said: ‘Exeter offers some of the UK’s best urban wildlife experiences. The River Exe brings a stream of nature into the city with migrating trout and salmon, otters and kingfishers being among its highlights. The Valley Parks offer a great variety of landscapes from meadows to woodland, ponds to cattle-grazed pasture. Each habitat is home to wildlife, common and rare.

‘Nature also appears in some unexpected parts of the city. Our work with local people now ensures that Exeter has a network of community orchards, wildflower-rich road verges and other spaces where wildlife is allowed to rule.’

For those wanting to stretch their legs a little further, the Exeter Green Circle is a 12-mile circuit that provides a great walking experience within the boundaries of Exeter - from green countryside valley parks to the pavements of quiet leafy suburbs. The walk is made up five sections, the route can be found here.

Clear cycle and pedestrian pathways throughout Exeter mean that a healthy commute to work, school or college is favoured by many residents, and the city’s Co-Bikes scheme offers residents and workers the chances to hire electric bikes by the hour. Partly as a result of these multiple opportunities for exercise, Exeter was rated the fourth healthiest city in the UK in 2017.

In fact, the city was recently listed as one of the top greenest cities in the UK, thanks to its high density of parks and green spaces. Researchers used an open street maps database to closely analyse the UK cities with the largest area of parks per person and Exeter was ranked ninth. You can read more about the accolade here.

So there you are. If you want to live somewhere that’s not just beautiful but both the greenest and the best for quality of life in the UK, there’s literally nowhere better than Exeter. We’ll be posting more about why Exeter is a great place to live so come and visit us again to find out more. 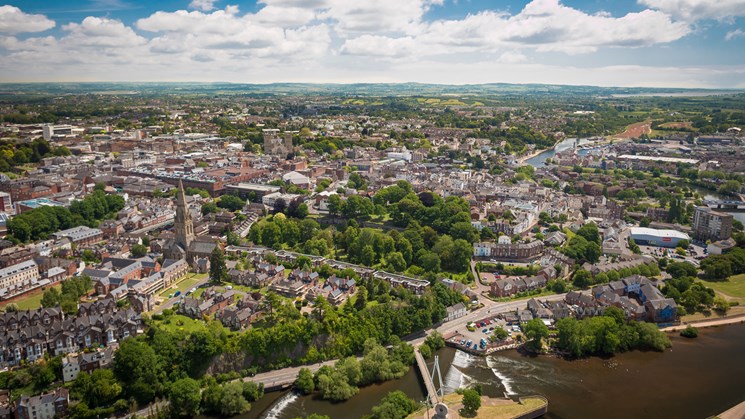 We can't wait for you to visit Exeter again.